When settlers first began coming to this area, their only way of getting up-to-date information on news was by word of mouth until October, 1887 when Major A. M. Dawson moved his plant from Vernon, TX to Mangum, OK, establishing the first Mangum paper. With only his George Washington hand press and a shirt full of type, the Mangum Star began. Major Dawson setup shop in a half dugout, later purchasing a block of land that had a small frame building with basement where he set up his press.

George W. Briggs, local cattleman was the first subscriber to the Mangum Star. A photo of him reading an old edition of the paper is found in the October, 1937 Golden Anniversary of the Mangum Daily Star. The story relates he heard about a new paper coming out and went to the office. He carefully read the first page, reached in his pocket and pulled out $1, the cost of a yearly subscription.

The very first edition of The Mangum Star urged a community watering trough for the horses of cowboys and settlers trading in Mangum stating, “Visitors to our fair city now have to carry water for their mounts at considerable inconvenience”. It also boasted of a board sidewalk of downtown so that "the fair sex won't soil their shoes."

Droughts and hard times developed in the Shortgrass county and the Major decided to sell the paper in 1890 for $750 to the Mangum Star Printing and Publishing Association composing of 22 stockholders. The paper's subscription list at the time consisted of 200 to 300 names.

This partnership dissolved in 1897. Mr. Townsend took the printing plant and Mr. Thacker left the newspaper business and devoted his time to his legal obligations leaving Mr. Townsend sole owner of the Star.

Rufus C. Echols bought a half interest in the Star in 1902 and he and Mr. Townsend were the publishers until 1905 when Mr. Echols became sole owner until 1906. During their partnership, the first typesetting machine was installed in the Star in April, 1904. Mr. Townsend traveled to Brooklyn for a month to learn to operate the machine.

Echols sold the publication to J. E. and Alfred H. Taylor in 1908. The Taylor brothers incorporated the business as the Star Publishing Company and published the Star as an afternoon daily for several months before selling the paper to a stock company in 1909. The stock company employed several managers including G. B. Townsend, former publisher.

The Star's plant was destroyed by fire in August 1916 and the newspaper was printed in Oklahoma City for several weeks. After the destruction of the Star plant, the stockholders decided to retire from the newspaper business and sold it to Dr. G. F. Border. Elmer V. Jessee came to Mangum in October 1916 to edit the Star at the invitation of Dr. Border. He acquired a half-interest in 1918 then became sole owner in 1919.

Eugene Pulliam bought The Star in June, 1929 as part of his Oklahoma chain. The Star began publishing daily on July, 29, 1929.

In 1939, Nance-McBride, Inc. purchased the Star and formed the Mangum Publishing Company. Editor Ben Langdon and wife, Betty, acquired full ownership of the paper in January, 1941. During World War II, around 1942 or 43, the paper became a weekly. It went back to a daily publication in 1946 then to a weekly again on January 6, 1949. For several years the Langdon’s printed both the Mangum Star and Greer County News. The Greer County News was printed on Monday of each week and the Mangum Star published on Thursday. The paper was printed in the back of their building at 108 East Lincoln for many years. Printing presses improved greatly during that time, but were very expensive to purchase. Eventually the two newspapers were combined into one weekly paper, the Mangum Star-News, the printing presses were disassembled and the printing done outside of the county.

The Langdon’s sold their interest in the Mangum Star-News to a group of investors and a new company, Mangum Newspaper, Inc., was formed. In May 1975 Hartman Newspaper, Inc. of Texas became the major stockholder. In 1976 Larry Briscoe, editor of the Mangum Star-News, sold his interest in the paper to Lowell Hatton. Hatton became editor and publisher and remained in that position until his death in 1988. Following his death, his wife, Velda, served until Hartman, Inc. bought her shares.

On July 1, 1999 Casey and Karla Paxton sold their newspaper in Cheyenne, Oklahoma and purchased the Mangum Star-News from Hartman Newspaper, Inc. As far as could be determined, Casey is the first Mangum High School Alumni to own the local newspaper.

The Mangum Star-News is the oldest continuously operated business in Greer County and the oldest newspaper in western Oklahoma. It is also the 4th oldest newspaper in the State of Oklahoma with only the Henryetta Free Lance (130 years), Eufaula Indian Journal (129 years) and the Coalgate Record (123 years) being older.
The Mangum Star-News has gone through many changes, but remains loyal to Greer County, striving to cover all areas of interests to its residents, pointing out the community's needs, recording its day-to-day history and heralding its achievements. The Mangum Star-News, as we know it today, has been known as several different names in the past: Mangum Star, January 5, 1898; Mangum Greer Weekly, November 22, 1900; Mangum Sun-Monitor, April 11, 1901; Greer County News, 1927; Mangum Daily Star; Mangum Star, January 6, 1949; and Mangum Star-News, January 6, 1975. 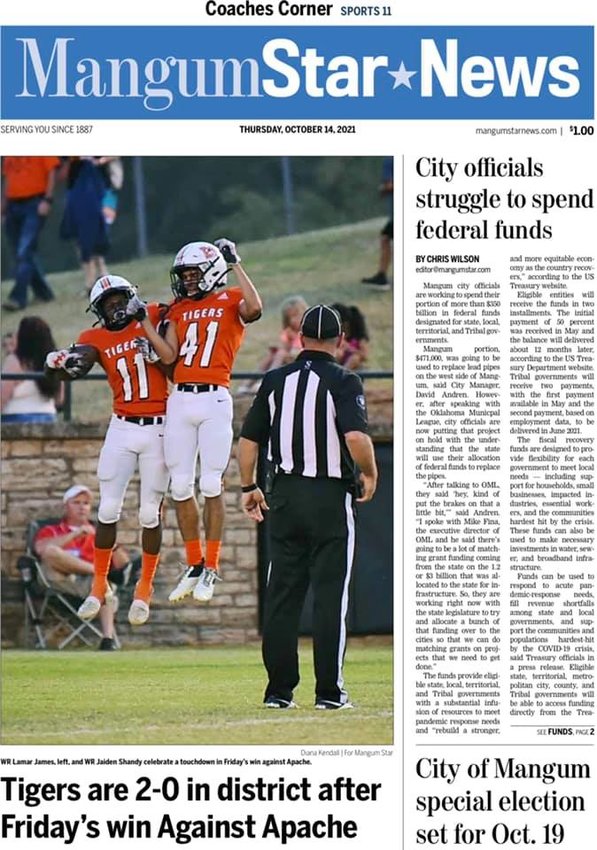 The City of Mangum will hold a special election Oct. 19 to fill the seat left behind by Travis Reece, who resigned in August. County Commissioners looking to appoint interim tax assessor With the resignation of Greer County Assessor Junita Reeves Oct. 8, county commissioners are scrambling to appoint an interim to fulfill the vacant office.
Chamber Connections Greer County Chamber of Commerce invites you to tune your radio to KTJS every Tuesday morning for the What’s Happening in Mangum show from 8:30 a.m. to 9:00 a.m. Voter registration deadline approaches Friday is the last day to apply for voter registration in order to be eligible to vote in the Nov. 9 Oklahoma Department of Career & Technology Center, Special Election, Greer County Election …